Home/Teams/2nd XV
2nd XVbiggarrfc2021-10-25T11:35:15+01:00
Our 2s squad is another critical part of our club. The 2s has been critical in the transition of young players into senior rugby and being a second senior side competing at a good level.

Our 2nd XV have brought many a success to our club as recently as a promotion winning campaign in 2015.

Calum Taylor has been our 2s Head Coach for one year and been assited by Andrew Howatson and Kev Robison.

We welcome any new players to join our Senior squad and are determined to continue to grow and improve our 1st and 2nd XV in the coming years.

This was the perfect example of a match with two contrasting halves. With a really youthful squad Biggar were off the pace in the first 40, allowing their visitors far too much space and giving them a free rein to attack. Perhaps overawed or simply lacking in confidence Stew Mel were able to take the initiative and scored 3 fairly straightforward tries, their pace and attack finding holes in the Biggar defence.

Well led by Jamie Tucker and ably backed by his team which after the break included ex-Biggar stand off Alistair Warnock (a former Edinburgh and Borders pro player who represented Scotland 7’s at among other competitions the Melbourne Commonwealth games in 2006), the Biggar side took the match by the scruff of the neck in the second period.

There was an 18 point gap between the two sides but gradually this was whittled down with tries from newcomer Jack Connor (2), veteran Andrew Howatson (Warnock and Howatson last player together for Biggar in a Colts National final in 1999!), Rhys Thomson and skipper Tucker. With only 1 of these converted the score at the match end was 30-21!

A remarkable but excellent comeback and one which should instill some confidence in the squad. Another to enjoy the party and making an all too rare appearance was Stevie Campbell who added some grunt up front. Once again though it was the youngsters, Euan Laing, Euan McAra, Archie Damer and David McGivern (among others) who took the eye. It was also good to see Cameron Gray making a return to action after injury.

Commiserations to the trio of Callum Yardley, Alex Toal and Cameron Snell who did not get onto the pitch. A frustrating afternoon for the 2nd XV as they finished on the wrong side of a close encounter at Meggetland. The squad will need to recover quickly as some big tests are around the corner against some of the league top sides such as Edinburgh Accies and Hawick.

A tough day in the capital for the 1st XV as the squad faced a heavy defeat.  A disappointing way to end the competitive action for 2019 but the coaching squad will be pleased with how there young squad is adapting to senior rugby.

After a couple of weeks off due to postponed fixtures the 2s were desperate to get back into action against Musselburgh at Stoneyhill. Musselburgh have been of the reserve divisions top teams all season currently sitting in 2nd 10 points behind leaders Hawick force. The 2s squad was boosted by experienced players Robbie Lavery and Andrew Peacock who slotted in alongside the in form youngsters such as Harry Archibald and Finn Barr. A fantastic team performance led to what was undoubtedly Biggar 2s strongest performance of the season so far. Tries from Drew Brewster, Alan Warnock and Craig McDonald alongside points from the boot of James Barr was enough to edge out this close contest.

After a narrow defeat in the borders earlier in the season Biggar were hopeful of a victory in the return fixture on home soil. However a strong defensive performance from Selkirk was to leave coaches and players from Biggar frustrated and disappointed. Biggar looked in control for the majority of the match and lead after a well worked team try finished by Craig McDonald. Selkirk then scored what would prove to be a pivotal try in the last quarter of the game to settle the contest. The last few weeks have outlined clear strengths and work ons of the 2s squad. Defensively the squad are performing well and have only conceded 2 tries in the last 2 games however the squad is struggling to capitalize on their opportunities in attack which cost them last weekend. Plenty for coach Calum Taylor to work on with the squad ahead of next weekends trip to Meggetland.

A fantastic result for the 2s against a premiership club that sat 4 places above them in the table. A converted try by Calum Taylor plus 2 Euan Bogle penalties won the match. With such a young squad its fantastic to see the likes of James Barr and Aird Jardine both of which have 1st XV experience being leaders to young lads in the 2s squad. The reward for hard work and good performances in the 2s was demonstrated this week as young back row Finlay Barr got his opportunity with the 1st XV of the bench against watsonians.

A defeat at home for the 2s squad was ultimately disappointing for coach Calum Taylor but yet again his youthful squad provided positives. They faced a physical Stew Mel squad that had been scoring points for fun all season.  21 of the 22 players involved in the 2s squad came trhough the ranks at Biggar which is fantastic to see. This match also marked the return from injury for Aird Jardine who was returning from 18 months out after a freak leg injury. Jardine returned with a 60 minute performance in which he even managed to get a try. The other biggar points came from the reliable boot of Euan Bogle, tries from Daniel McKonkey and Euan Sanderson.  Youngsters such as Lee Smith, Harry Archibald, Rhys Thomson and Jack Balkwill continue to impress with their attitude and application.

Mansfeild is never an easy place to and when you add tough weather conditions it will always going to be tough for our 2s squad. The scoreline however perhaps doesn’t give our boys credit as they competed all the way with the Borders side. Biggars only points came from the reliable boot of Euan Bogle.

Biggar 2s returned to winning ways with a bonus point victory over Currie Chieftains on Saturday.  Tries from Euan Bogle (x2), Dan Mcconkey, Andrew Muir and Cameron Snell. The squad managed to grind out a win but they were pushed hard by a resilient Currie side. A scrappy first half frustrated the hosts but a far improved second half seen Biggar pull away from their city counterparts.  With 7 of the squad only just moving up from 18s 2s coach Calum Taylor will be pleased how the young ones in his squad have quickly acclimatized to senior rugby and are putting in strong performances. The game was called early as Currie had been reduced to 11 due to injuries.  Club veteran David Reive spoke after the match insisting the squad must improve if they to put a consistent run of form together but also applauded the teams ability to get over the line in a stuffy contest.

It was another tough test for our 2s squad who travelled to Goldenacre to face one of the strongest teams in the division. We travelled with a strong squad of 22 that had a good blend of both youth and experience with the likes of Douglas Notman and Alan Warnock joining the squad. The Game was at points scrappy but there was still positives to take from the defeat as the squad look to build towards hosting Currie Chieftains this Saturday.

It was a 2s squad with a blend of youth and experience to face Musselburgh with David Reive and Ian Renwick joining the squad. However the 2s squad came up just short against a clinical Musselburgh side. A big learning curve for some of the young players who are still only starting life in senior rugby but the squad will have a brilliant chance to bounce back when they travel to Goldenacre to face Heriots Blues next Saturday

The 2s built on round 2s home victory over Boroughmuir with a hard fought victory at Riverside Park in Jedburgh. It was another youthful squad that travelled to the Borders and Head Coach Calum Taylor would have been delighted with the 5 points collected on the road. Youngsters such as Harry Archibald who is fresh out of the colts continue to improve week on week and its encouraging signs ahead for the 2s squad. The squad will now prepare to welcome Musselburgh to Hartree next week.

The 2nd XV notched up their first win of the season in a 5 try bonus point defeat of Boroughmuir.

Boroughmuir led 7-5 at the break, Biggar’s discipline and ball retention once again costing them. Euan Bogle’s weaving run led to the only points for the hosts in an otherwise scrappy first half.

Biggar took the initiative early into the second half through Marcus Dobie after some sustained pressure. This proved to be a decisive point in the match with tries following from Simon Horrell, Scott Watson, Jamie Bell and Andrew Muir with Euan Bogle adding 2 conversions before a consolation score from Boroughmuir on the final whistle.

There were several notable performances from younger members of the squad with Harry Archibald, Lee Smith and Jack Balkwill all making a great account of themselves and showing how much they are learning and developing.

The 2nds travel to Jed next week and this young team will be looking forward to getting more game time under their belts. Many thanks to veterans Callum Taylor and Scott Watson for making themselves available, the latter crowning his time with a try.

Man of the match: Marcus Dobie

A try bonus point and a losing bonus point was the reward for the new look 2nd XV, who got their season off to a start with a narrow loss at Selkirk on Saturday.

With an average age of only 20 and 7 players starting their debut season of senior rugby this is certainly a team who’s development will be interesting to watch over the course of the season.

Despite their youth, Biggar enjoyed real scrum dominance through the game and will be disappointed not to leave Philiphaugh with more, with discipline and coughing up cheep possession costing them dear.

The game proved to be a real nip and tuck affair with Biggar points coming from a quick tap by Finn Barr, a junky Euan Bogle run and two superb runs by Simon Horrell firstly putting Marcus Dobie in and the second ending in a high tackle  over the line and a penalty try.

A different bounce of the ball, a couple less injuries or one more pass to hand and this could well have been Biggar’s day.Instead having to settle for 2 losing bonus points this young team will learn, develop and move forward. The 2s are looking forward to welcoming Boroughmuir to Hartree Mill next week. 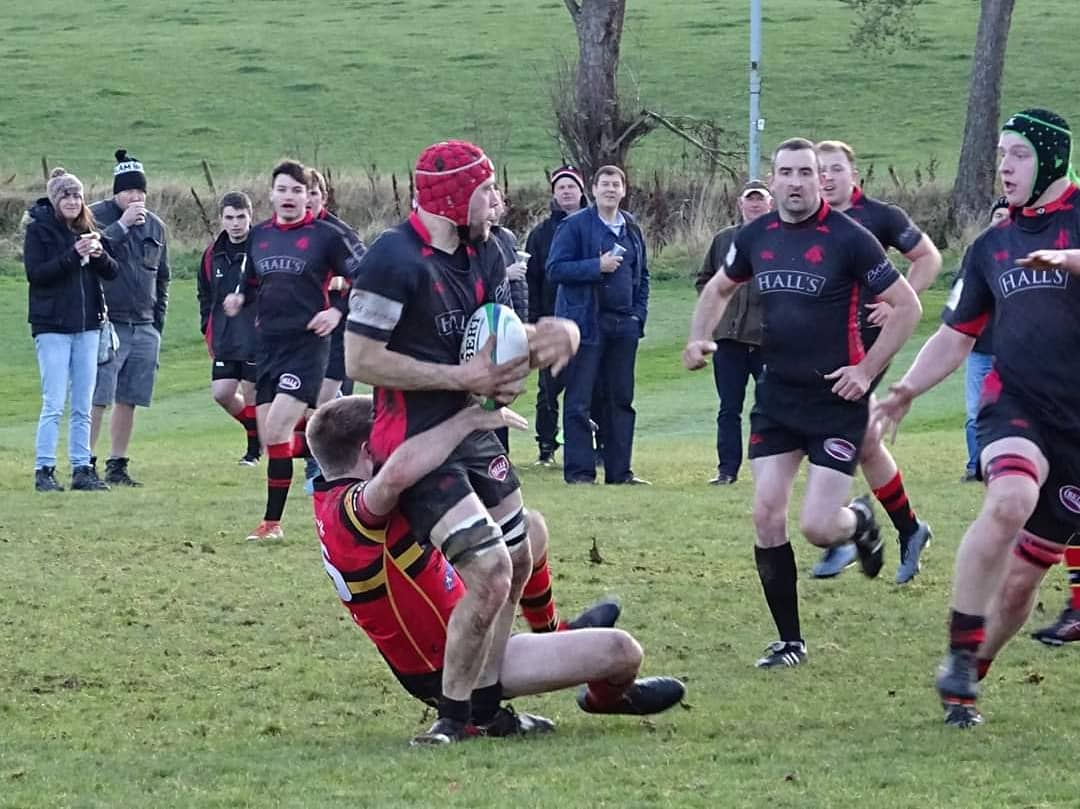 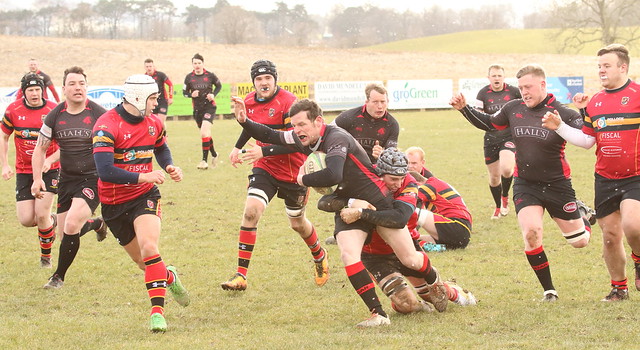